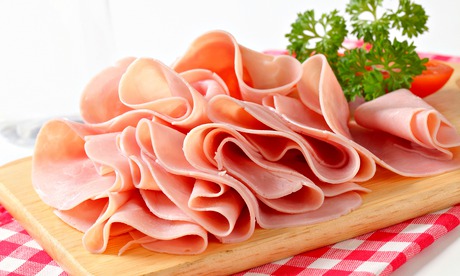 Some ham tested contained ‘meat emulsion’ (meat ground with additives so fat can be put through it) or ‘meat slurry’ (removing scraps of meat from bones). Photo: Alamy

Consumers are being sold food including mozzarella that is less than half real cheese, ham on pizzas that is either poultry or “meat emulsion”, and frozen prawns that are 50% water, according to tests by a public laboratory.

The checks on hundreds of food samples, which were taken in West Yorkshire, revealed that more than a third were not what they claimed to be, or were mislabelled in some way. Their results have been shared with the Guardian.

Testers also discovered beef mince adulterated with pork or poultry, and even a herbal slimming tea that was neither herb nor tea but glucose powder laced with a withdrawn prescription drug for obesity at 13 times the normal dose.

A third of fruit juices sampled were not what they claimed or had labelling errors. Two contained additives that are not permitted in the EU, including brominated vegetable oil, which is designed for use in flame retardants and linked to behavioural problems in rats at high doses.

Experts said they fear the alarming findings from 38% of 900 sample tests by West Yorkshire councils were representative of the picture nationally, with the public at increasing risk as budgets to detect fake or mislabelled foods plummet.

Counterfeit vodka sold by small shops remains a major problem, with several samples not meeting the percentage of alcohol laid down for the spirit. In one case, tests revealed that the “vodka” had been made not from alcohol derived from agricultural produce, as required, but from isopropanol, used in antifreeze and as an industrial solvent.

Samples were collected both as part of general surveillance of all foods and as part of a programme targeted at categories of foodstuffs where cutting corners is considered more likely.

West Yorkshire’s public analyst, Dr Duncan Campbell, said of the findings: “We are routinely finding problems with more than a third of samples, which is disturbing at a time when the budget for food standards inspection and analysis is being cut.”

He said he thought the problems uncovered in his area were representative of the picture in the country as a whole.

The scale of cheating and misrepresentation revealed by the tests was described by Maria Eagle, the shadow environment secretary, as unacceptable. “Consumers deserve to know what they are buying and eating and cracking down on the mislabelling of food must become a greater priority for the government,” she said.

A Defra spokesperson said: “There are already robust procedures in places to identify and prevent food fraud and the FSA has increased funding to support local authorities to carry out this work to £2m.

“We will continue to work closely with the food industry, enforcement agencies and across government to improve intelligence on food fraud and clamp down on deliberate attempts to deceive consumers.”

Testing food is the responsibility of local authorities and their trading standards departments, but as their budgets have been cut many councils have reduced checks or stopped collecting samples altogether.

The number of samples taken to test whether food being sold matched what was claimed fell nationally by nearly 7% between 2012 and 2013, and had fallen by over 18% in the year before that. About 10% of local authorities did no compositional sampling at all last year, according to the consumer watchdog Which?

West Yorkshire is unusual in retaining a leading public laboratory and maintaining its testing regime. Samples are anonymised for testing by public analysts to prevent bias, so we are unable to see who had made or sold individual products. Many of the samples were collected from fast-food restaurants, independent retailers and wholesalers; some were from larger stores and manufacturers.

Substitution of cheaper ingredients for expensive materials was a recurring problem with meat and dairy products – both sectors that have seen steep price rises on commodity markets. While West Yorkshire found no horsemeat in its tests after the scandal had broken, mince and diced meats regularly contained meat of the wrong species.

In some cases, this was likely to be the result of mincing machines in butcher’s shops not being properly cleaned between batches; in others there was clear substitution of cheaper species. Samples of beef contained pork or poultry, or both, and beef was being passed off as more expensive lamb, especially in takeaways, ready meals, and by wholesalers.

Ham, which should be made from the legs of pigs, was regularly made from poultry meat instead: the preservatives and brining process add a pink colour that makes it hard to detect except by laboratory analysis.

Meat emulsion – a mixture in which meat is finely ground along with additives so that fat can be dispersed through it – had also been used in some kinds of ham, as had mechanically separated meat, a slurry produced by removing scraps of meat from bones, which acts as a cheap filler although its use is not permitted in ham.

Levels of salt that breached target limits set by the Food Standards Agency were a recurring problem in sausages and some ethnic restaurant meals. The substitution of cheaper vegetable fat for the dairy fat with which cheese must legally be made was common. Samples of mozzarella turned out in one case to be only 40% dairy fat, and in another only 75%.

Several samples of cheese on pizzas were not in fact cheese as claimed but cheese analogue, made with vegetable oil and additives. It is not illegal to use cheese analogue but it should be properly identified as such.

Using water to adulterate and increase profits was a problem with frozen seafood. A kilo pack of frozen king prawns examined contained large quantities of ice glaze, and on defrosting the prawns themselves were found to be 18% added water. Only half the weight of the pack was seafood as opposed to water.

In some cases the results raised concerns over immediate food safety. The herbal slimming tea that was mostly sugar contained a prescription obesity drug that has been withdrawn because of its side-effects.

Making false promises was a dominant theme among vitamin and mineral supplements. Of 43 samples tested, 88% made health claims that are not allowed under legislation because there is no science to support them or were mislabelled as to their content in some way.

Even when fraud or mislabelling is found, it is not aways followed up. Once it has detected a problem with a product, a council is required to refer it to the home authority in which it was originally made, which may or may not take enforcement action.

Richard Lloyd, executive director of Which?, called for more effective use of resources and tougher penalties.

“No one wants to see another incident like the horsemeat scandal happen again and the rigorous enforcement of standards underpinned by effective levels of food testing is essential for restoring consumers’ trust in this industry,” he said.

• This article was amended on 8 February to include a Defra comment which had been omitted.