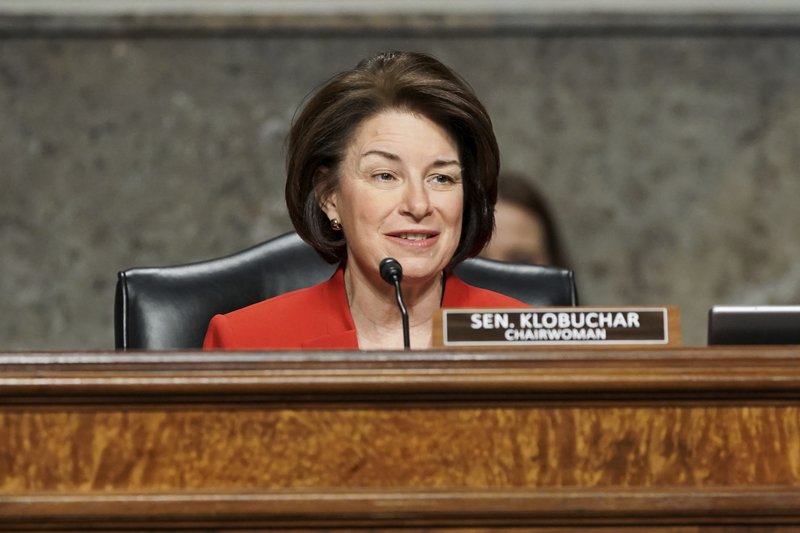 Sen. Amy Klobuchar, D-Minn., speaks during a Senate Committee on Homeland Security and Governmental Affairs and Senate Committee on Rules and Administration joint hearing Wednesday, March 3, 2021, examining the January 6, attack on the U.S. Capitol in Washington. (Greg Nash/Pool via AP)

WASHINGTON (AP) — The battle against bigness is building. Whether it’s beer, banks or book publishing, lawmakers are targeting major industries they say have become so concentrated that they’re hurting competition, consumers and the economy.

The economic dislocation of the pandemic has laid bare the struggles of small businesses unable to compete with corporate giants that have been able to capitalize on the new order. Experts and lawmakers are throwing out stunning stats:

The four biggest airlines control about 65% of U.S. passenger traffic, five giant healthcare insurers control an estimated 45% of the market, pharmaceuticals are dominated by three major companies, the top four banks control about 44% of the market, the so-called Big Five book publishers control some 80% of the U.S. book market, and Google alone accounts for about 90% of web searches worldwide.

Beer and a burger? Four companies are estimated to control 80% of U.S. meat-packing; the top four brewers and importers control about 76% of the U.S. beer market.

Congress, federal regulators and states had already been putting Big Tech companies under intense scrutiny for nearly two years and even suing some for antitrust. Now with Democrats in the majority in Congress and President Joe Biden seemingly prepared to act on an anti-monopoly agenda, the focus is widening to the rest of corporate America.

Sen. Amy Klobuchar, D-Minn., has put forward expansive legislation to overhaul antitrust law. It would make it harder for dominant companies to win regulators’ approval of mergers and stretch the government’s authority over competition in other ways. Klobuchar, who heads the Senate Judiciary subcommittee on competition policy, has launched a broad examination by the panel of monopoly concerns.

“At stake is nothing less than the future of our economy and the way of life that it supports,” Klobuchar said at the panel’s first hearing last week. “This is about saving capitalism and building an economy that works for all Americans.”

At the extreme, experts don’t expect the antitrust push to force breakups of big corporations, as is being called for by many critics of Big Tech. But legislative success could make it harder for the companies to make new acquisitions and shift the burden to them to prove that a given merger would be good for consumers. Right now the onus is on the government to prove a merger would be bad.

On Tuesday, the Federal Trade Commission singled out one industry, Big Pharma, to be subjected to a tougher stance on weighing proposed mergers. Citing proliferating mergers and “skyrocketing” drug prices, new acting FTC chair Rebecca Kelly Slaughter said, “It is imperative that we rethink our approach toward pharmaceutical merger review. We intend to take an aggressive approach to tackling anticompetitive pharmaceutical mergers.”

The current drift toward bigness began with a merger boom in the 1980s in corporate America that fattened profits for the dominant companies. Decisions by both Democratic and Republican administrations over the past 15 years have allowed most big mergers to sail through.

With anti-monopoly sentiment having a moment, some observers see possible bipartisan agreement on new legislation, with Klobuchar’s blueprint a likely starting point to be pushed and pulled. Democrats are mindful that the Senate is split 50-50 with Republicans, and their one-vote margin depends on a tiebreaker by Vice President Kamala Harris. That dictates reaching for compromise, as it would likely take the support of at least 10 Republicans to make new antitrust law.

“We have a monopoly problem in the U.S.,” said Allen Grunes, who led merger investigations at the Justice Department as an antitrust attorney. “It’s not going to be perfect; it’s not going to be easy. But I think there’s a reasonable chance of bipartisan agreement.”

“Is it a tweak or is it a big reform? Something’s going to happen,” said Grunes, now an attorney with Brownstein Hyatt Farber Schreck in Washington.

George Hay, a law professor and antitrust expert at Cornell University, wonders, “God knows what somebody’s going to tack onto it. It opens up the floodgates.”

Republicans express concern over runaway concentration of corporate power and stress their belief in competition to keep the economy vibrant. But hold on, some are saying, let’s not punish bigness for its own sake; better to look at each case individually. They say big companies can bring efficiencies of scale, reduce prices and create jobs.

Industry executives can be expected to make similar arguments when they weigh in on Klobuchar’s legislation at upcoming hearings and mount a lobbying blitz. So far Corporate America hasn’t spoken out publicly on the new antitrust initiative.

Republican lawmakers are denouncing a new school of antitrust thought, gaining currency among Democrats, that looks beyond the impact of big-company market dominance on consumer prices to its broader effects on industries, employees and communities.

Biden has named a legal scholar who’s an adherent of this school, called “hipster antitrust” by its detractors, as a top presidential adviser on competition. And he’s expected to name another to a seat on the Federal Trade Commission; the moves signal a possibly tough stance for Biden on antitrust. He said as a candidate that breaking up Big Tech companies was something that should be considered.

With this approach, Democrats are seeking to use antitrust law not to promote competition but to advance social or environmental goals, the Republicans contend.

“What we need now is not a sweeping transformation of the antitrust laws,” Sen. Mike Lee of Utah, the Judiciary panel’s senior Republican, said at the hearing. “Rather, this moment calls for … (federal) agency leaders with the resources and the will to vigorously enforce the laws we have.”

As a moderate Democrat, Klobuchar may be looking to try on Republican President Teddy Roosevelt’s “Trustbuster” mantle. Her book coming out next month is titled “Taking on Monopoly Power from the Gilded Age to the Digital Age.”