Following on the heels of our Rally to Stop the Stealin’, which brought together nearly 500 fired-up ranchers from across the country last week in Omaha to demand fair and just markets, OCM is pushing forward with three related policy priorities.

Checkoff Program Reform: OCM along with the Kansas Cattlemen’s Association staged an impactful media conference at the Kansas State Capitol that exposed the unjust way in which the Kansas Livestock Association, a lobbying organization, collects and administers checkoff funds with a total lack of transparency and accountability to Kansas cattlemen and women. In the words of Kansas Cattlemen’s Association President, Greg Davis: “This is taxation without representation”. Learn more: See the livestream of the event here. Read the event press release here and the in-depth research report on checkoff abuses here. What’s next? Thanks to your membership and support, OCM will continue to expose checkoff abuses around the country. In Kansas, we plan to continue monitoring the illegal overlap that currently exists between KLA and the Kansas Beef Council, as we seek to bring about reform and ensure justice for all farm and ranch families who pay the checkoff. 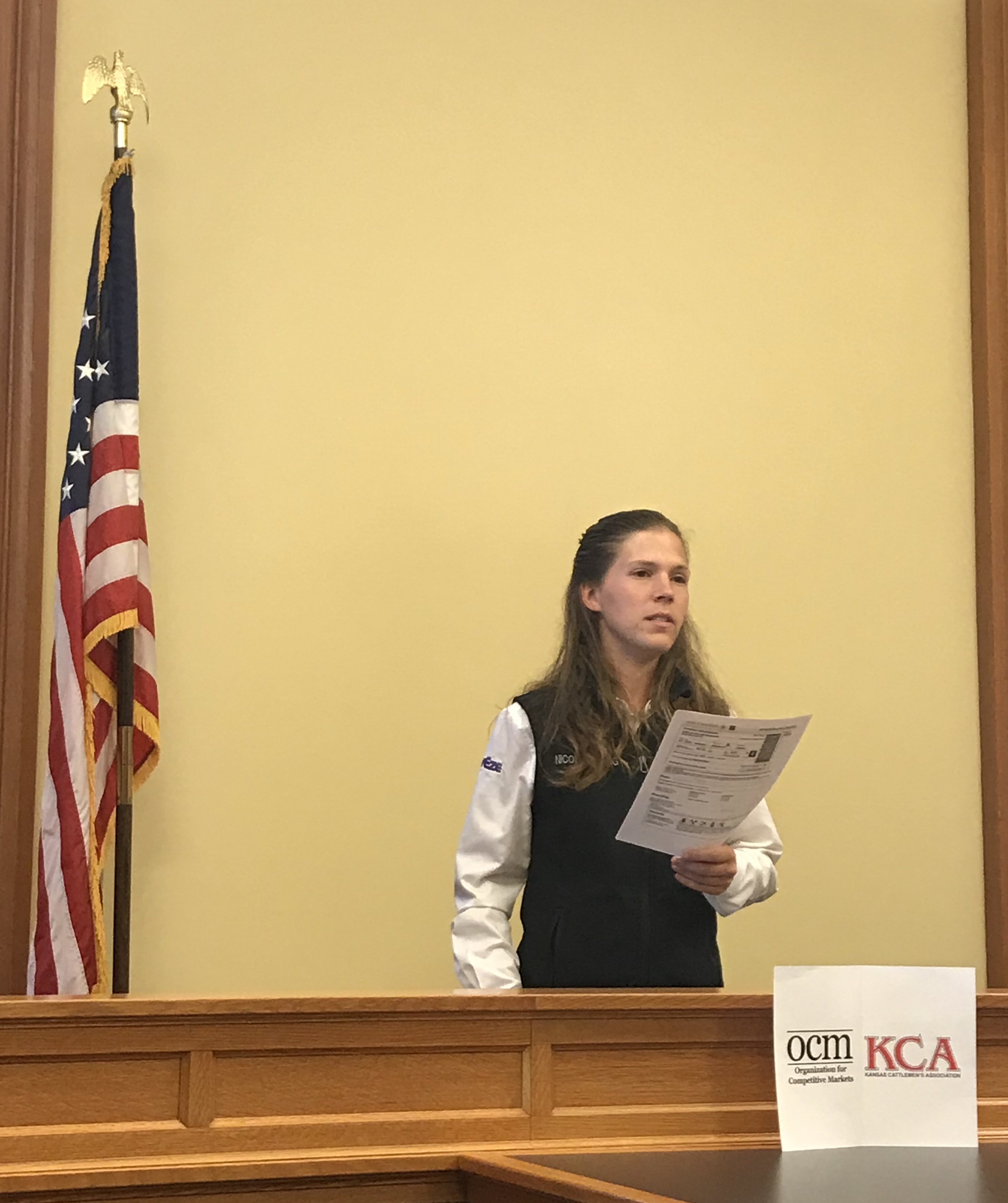 Nicole Pfrang, 5th generation Kansas cattle rancher. “Is it any wonder why we have lost our faith in the beef checkoff? Despite billions of dollars invested, we ranchers have taken a 50% cut in our paycheck.”

Packers & Stockyards Act Reform: In May, USDA announced its intent to publish revisions to the Packers and Stockyards (P&S) Act. OCM along with FarmAid, the Rural Advancement Fund International-USA (RAFI-USA), the National Sustainable Agriculture Coalition (NSAC) and the Government Accountability Project (GAP) delivered more than 84,000 petition signatures to USDA, demanding the new rules include these 6 points and clarifies that a producer is not required to demonstrate harm to competition across the entire sector in order to file a complaint. We could not have gathered these 84,000 signatures without your dedication to the cause of fair markets for farm and ranch families. Thank you! What’s next? We are now waiting on USDA to release the rules. A comment period will follow, during which we will need your help to register responses and recruit others to offer support. This comment period is our chance to insist that USDA defend market competition while leveling the playing field for independent livestock producers.

JBS: On October 10th, Senators Marco Rubio (R-FL) and Robert Menendez (D-NJ) sent a letter to Treasury Secretary Steven Mnuchin asking for the Committee on Foreign Investment in the United States (CFIUS) to review transactions by JBS, which has bought several American meat companies in recent years. The senators charge that as JBS moved into the U.S. market, “it engaged in illicit financial activities including bribing Brazilian government officials and the business relationships with Venezuela’s illegitimate Maduro regime.” OCM has worked hard to shed light on JBS’ illicit activities. We are thankful to our elected officials for taking action and are grateful for your support and membership, without which we could not have exposed unchecked monopoly power for what it produces, corrupt corporations. What next? OCM will continue to call out abuse in our farm and food system. No one should profit from illegal activity.

Thank you for your continued support. Stay in touch.