NOBULL: Why Family Farmers Have to Pay Off Big Agribusiness — This is one tax Democrats should be happy to cut.

Why Family Farmers Have to Pay Off Big Agribusiness 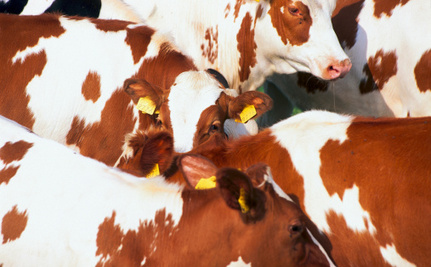 Remember when the U.S. Department of Agriculture decided to join the Meatless Mondays movement, got heat from the beef industry, and backed right down? Guess who keeps the industry’s promoter, the National Cattlemen’s Beef Association (NCBA), in business: the U.S. government. Now guess which sworn enemies are united in wanting to snuff out this arrangement: independent cattle ranchers and animal advocates. It’s screwy.
It all started when the government set out to help struggling small-scale ranchers in the 1980s by imposing a $1 per cow “checkoff” tax on ranchers that it funneled to trade associations to promote consumer demand for beef. What it wound up with is a national trade association that opposes attempts to improve the welfare of animals raised for food (all of them — not just cattle); opposes efforts to promote healthful, plant-based eating; supports ag-gag laws to keep the goings-on in meatpacking, feeding, and slaughter facilities secret; and, most ironically, is squashing small family farms and ranches, which are forced to pay for the privilege. AsWashington Monthly writer Siddhartha Mahanta puts it, today the checkoff program “couldn’t be more different than originally envisioned.”
One example of the conflict between big and small meat companies: local cattle producers are peeved by the NCBA’s opposition to mandatory country-of-origin labeling. Big Ag’s position is anti-disclosure, just as in the ag gag context: it wants to keep consumers in the dark. But the reason it opposes labeling is that it would be prohibitively expensive for meat-packers to trackthe origin of every glop of beef that gets mixed into a hot dog or hamburger. Local beef producers, however, stand only to gain from origin labeling, assuming consumers with a preference will pick U.S. meat over imports.
Small operations’ beef with the NCBA goes beyond the labeling conflict. In 2012, a group representing smaller farmers teamed up with the Humane Society of the United States (HSUS) to bring a lawsuit, Callicrate v. USDA, seeking to cut off the flow of checkoff taxes to the NCBA. The farmers’ group, called the Organization for Competitive Markets (OCM), charged the NCBA with facilitating the rise of agribusiness and the demise of small producers. “Since the beef checkoff program was commenced 26 years ago,” said OCM President Fred Stokes, “we have lost 40% of our producers.”
Presumably larger players knocked them out of business. OCM, which withdrew the lawsuit after a USDA investigation concluded that the NCBA had not used money improperly, considers itself a trust-buster.
R-CALF USA (slogan: “fighting for the U.S. cattle producer”) has been waging the same war as OCM for a while, repeatedly petitioning the USDA to cancel its contracts with NCBA. R-CALF USA believes it is time “to stop the NCBA from unlawfully using Beef Checkofffunds to continually undermine the policy goals of independent U.S. cattle producers, which has effectively reduced their economic opportunities.”
Animal advocates are just as eager to see the big boys of meat taken out. First of all, agribusiness’s giant factory farms and slaughterhouses are hell on earth for animals (not that family farms are exactly cushy, given their tendency to be lethal). Second, the monopolies spend fortunes to keep it that way. The mega-corporations that control the industry, the NCBA, and its money are formidable opponents of animal welfare measures promoted by HSUS and others. The fact that the NCBA made USDA turn, on a dime, to an anti-Meatless Monday position that is 180 degrees opposite its mission of promoting Americans’ health, illustrates the association’s might.
The battle continues between the Goliath of monopolistic agribusiness conglomerates on the one side and small beef producers, animal welfare advocates and consumers on the other, long after the checkoff tax outlived its usefulness. This is one tax Democrats should be happy to cut.