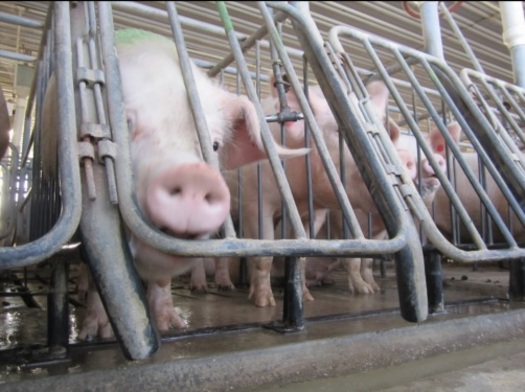 PHOTO: Fast-food giant Wendy’s is demanding quarterly reports from pork suppliers about their ability to provide pork produced without the use of gestation crates. Photo credit: Humane Society of the United States.

Fast food giant Wendy’s says it will require its suppliers to provide quarterly reports regarding their ability to provide pork produced without the use of gestation crates.

Josh Balk, director of food policy for the Humane Society of the United States, says the cages that are used to house breeding pigs are so restrictive that the animals can’t even turn around.

“Imagine putting a cage barely larger than the pig’s own body around her for virtually her entire life,” he says. “If we treated a dog or cat in this cruel manner, we’d be arrested for cruelty to animals.”

The announcement follows a commitment Wendy’s made in 2012 to eliminate gestation crates from the company’s supply chains.

Dozens of other food companies have made the same commitment.

Balk points out that while the food industry has led the way on the issue, the pork industry has been slow to follow.

“Some have battled back and have tried to maintain somehow that gestation crates are OK and that consumers really don’t care about cruelty to animals,” he relates. “But fortunately for the animals, the food industry hasn’t listened too much to what the pork industry has to say on this particular issue.”

Balk says he applauds Wendy’s and other food companies for sticking to their commitments to eliminate a cruel food system.

“The combination of the initial announcement and now the follow-up will hopefully ensure that some other pigs in the pork industry will no longer be confined to the point that they’re unable to turn around for virtually their entire life,” he says.

So far, nine states have passed laws to prohibit the use of gestation crates, but Missouri is not among them.