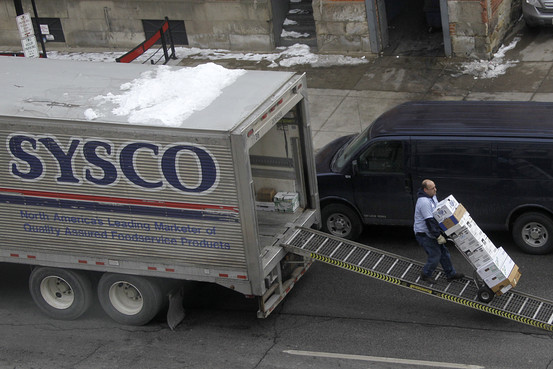 Sysco Corp. SYY +13.57% said it would buy US Foods for $3.5 billion in stock and cash, creating a food distribution giant with about $65 billion in annual revenue.

The combined company will have increased leverage selling and distributing food goods from manufacturers to restaurants, hospitals, hotels, schools and other institutions. That middleman role already makes the companies important players in the service economy: Sysco alone has about 425,000 customers.

Sysco’s shares soared by more than 20% in early trading Monday morning. The shares, listed on the New York Stock Exchange, had gained only about 8.4% this year as of Friday’s close.

The deal has been approved by the boards of both Houston-based Sysco and US Foods, of Rosemont, Ill., the companies said in a statement. In addition to paying about $3 billion in stock and $500 million in cash, Sysco will assume or refinance US Foods debt of about $4.7 billion, they said.

The companies said their combination is expected to generate "synergies" of at least $600 million after three-to-four years, in part from supply chain efficiencies and reducing administrative overlap.

Sysco Chief Executive Bill Delaney said that the company might need to sell parts of its business to satisfy antitrust regulators, though it has no such plans yet.

The antitrust discussions "will be a review process and it will take several months, and there could very well be some divestitures, but even with some divestitures this is still a very good deal," he said on a conference call.

Sysco considered buying US Foods almost seven years ago but didn’t. Mr. Delaney said the change of heart comes now that US Foods is focused more on innovation and improving efficiency.