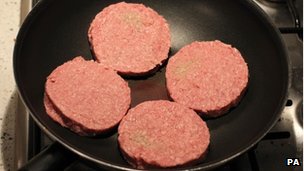 Why are the British revolted by the idea of horsemeat?

Tesco has placed full-page adverts in a number of national UK newspapers apologising for selling beefburgers that were found to contain horsemeat.

The supermarket giant said it and its supplier had let customers down and promised to find out "what happened".

On Tuesday, it emerged Irish food inspectors had found almost 30% horsemeat in one brand sold by Tesco.

Smaller amounts were also found in beefburgers sold by Iceland, Lidl and Aldi and Dunnes.

Officials said the contaminated products – on sale in the UK and the Irish Republic – posed no risk to human health and had been removed from shop shelves.

In its advertisement, which has the headline "We Apologise", Tesco said: "We and our supplier have let you down and we apologise.

"So here’s our promise. We will find out exactly what happened and, when we do, we’ll come back and tell you.

"And we will work harder than ever with all our suppliers to make sure this never happens again."

It stressed it had "immediately withdrawn from sale all products from the supplier in question".

The company also said customers who had any of the contaminated items at home could return them to any Tesco store for a full refund.

The revelations come just one week after Tesco’s chief executive Philip Clarke insisted the company was "back on form" in Britain as it reported its strongest growth in UK Christmas sales for three years.

However, news of the horsemeat contamination was followed by a drop in the company’s shares on Wednesday – wiping hundreds of millions of pounds off its market value.

Speaking in Parliament, Prime Minister David Cameron condemned the situation as "a completely unacceptable state of affairs" and called for an urgent investigation by Britain’s Food Standards Agency (FSA).

"People in our country will have been very concerned to read this morning that when they thought they were buying beefburgers, they were buying something that had horsemeat in it," he said.

Analysts said it was a public relations blow for Tesco.

Espirito Santo Investment Bank analyst, Caroline Gulliver, said the news was "likely to, at least temporarily, reduce consumers’ trust in the quality of Tesco’s products", which was unhelpful at a time when the retail giant was seeking to promote "the quality underpinning Tesco own label and Everyday Value products".

The FSA said it would continue its review of the traceability of the food products concerned, and would consult local councils and authorities in Ireland over whether legal action should be taken against any of the companies involved.

The Food Safety Authority of Ireland (FSAI), which is conducting similar inquiries, said the meat had come from two processing plants in the Irish Republic – Liffey Meats and Silvercrest Foods – and the Dalepak Hambleton plant in North Yorkshire.

Contaminated burgers had been on sale in Tesco and Iceland in the UK and the Republic of Ireland, where they were also on sale in Dunnes Stores, Lidl and Aldi.

A total of 27 burger products were analysed, with 10 of them containing traces of horse DNA and 23 containing pig DNA.

In addition, 31 beef meal products, including cottage pie, beef curry pie and lasagne, were analysed, of which 21 tested positive for pig DNA.

Iceland and Lidl said they had withdrawn affected products and were investigating the matter.

More on This Story

· Why are the British revolted by the idea of horsemeat?

· Inquiry into horsemeat in burgers