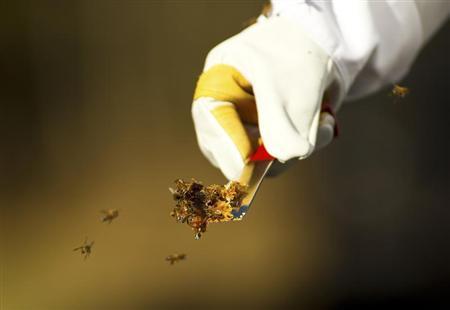 Honey bees swarm around a small piece of honeycomb on a farm in North Carolina, December 14, 2012.

(Reuters) – U.S. environmental regulators are failing to protect honey bees and their role in pollinating important food crops, and should immediately suspend use of some toxic insecticides tied to the widespread deaths of the bees, a lawsuit filed on Thursday charges.

"It is a catastrophe in progress," said migratory bee keeper Steve Ellis who maintains 2,000 bee hives for pollinating crops from Minnesota to California. "We have an ongoing problem that is worsening."

Orchard operators use bees to pollinate a variety of important U.S. crops, including almonds, cranberries, blueberries, avocados, apples, cherries, pears, and more. But over the last several years both the number of bees and the vitality of the bees has been in marked decline in the United States. Many studies have linked the prevalence of some new insecticides with the loss of the bees.

On Thursday four professional beekeepers and five environmental and consumer groups said they would try to get a court to order the EPA to take action. The groups filed their lawsuit against the EPA in the Northern District Court of California, demanding that the regulatory agency suspend the use of pesticides clothianidin and thiamethoxam.

The pesticides, which are part of a class of systemic insecticides known as neonicotinoids, are absorbed by plants and transported throughout a plant’s vascular tissue, making the plant potentially toxic to insects, the groups said.

Clothianidin and thiamethoxam first came into heavy use in the mid-2000s, at the same time beekeepers started observing widespread cases of colony loses, leaving beekeepers unable to recoup their losses, they said.

"Beekeepers and environmental and consumer groups have demonstrated time and time again over the last several years that EPA needs to protect bees. The agency has refused, so we’ve been compelled to sue," said Peter Jenkins, a lawyer for the Center for Food Safety who is representing the coalition of plaintiffs.

The groups said they have obtained records that show several "legal violations" by EPA officials connected to the approvals for clothianidin and thiamethoxam products.

The EPA said in a statement that it is trying to get a better understanding of the risks to honey bees and is working aggressively to protect bees from pesticide risks through a number of programs. It also is accelerating review of the neonicotinoid pesticides because of the bee concerns, it said.

The plaintiffs also include beekeeper Ellis of Old Mill Honey Co; Jim Doan of Doan Family Farms; Tom Theobald of Niwot Honey Farm; and Bill Rhodes of Bill Rhodes Honey. The plaintiffs also include the groups Beyond Pesticides, the Center for Food Safety, the Pesticide Action Network North America, the Sierra Club and the Center for Environmental Health.

Syngenta and Bayer, are leading global producers of neonicotinoids, and say the harmful effects on bees are unproven. But in Europe, the European Commission recently proposed a ban of neonicotinoids on many crops after the EU’s European Food Safety Authority said neonicotinoids posed an acute risk to honey bee health.

In the United States, such neonicotinoids are routinely used on more than 100 million acres of corn, wheat, soy and cotton and are in some home gardening products.

The plaintiff coalition said many beekeepers are reporting losses of over 50 percent this year and said the shortages have left many California almond growers without enough bees to effectively pollinate their trees.

Along with bees, birds, bats, butterflies, beetles, and other small mammals are involved in pollinating plants used for food and some species have seen a 90 percent decline in their populations over the last decade, according to the North American Pollinator Protection Campaign, a collaboration of more than 120 organizations in the United States, Canada, and Mexico who promote the role that pollinators play in food systems.