Drought Expands East To The Mississippi River, Where It’s Really Messing Things Up

I lead Forbes coverage of food and agriculture.

Footprints, human and animal, dot stretches of the Mississippi River that have been underwater for as long as people remember, and eight barges have run aground this year. Rain has been scarce, with little prospect for more.

Drought’s deadly fingers have moved east, from the dried-up wells of California’s Central Valley and into the American Midwest, where much of America’s food is grown, and even farther, into the Southeast. Its tentacles have parched parts of America’s most important river and now threaten a majority of the country — 52.7% by the U.S. Drought Monitor’s count, and 146 million people, 12 million more than a mere week ago. It’s the deepest national drought since 2012, and if nothing changes it’ll outpace that benchmark soon.

“This long-running drought has had a profound effect on Western water supplies and American agriculture,” USDA meteorologist Brad Rippey told Forbes. He cited chronically dry rangelands and pastures as well as reduced yields in 2022 winter wheat, cotton and sorghum harvests. 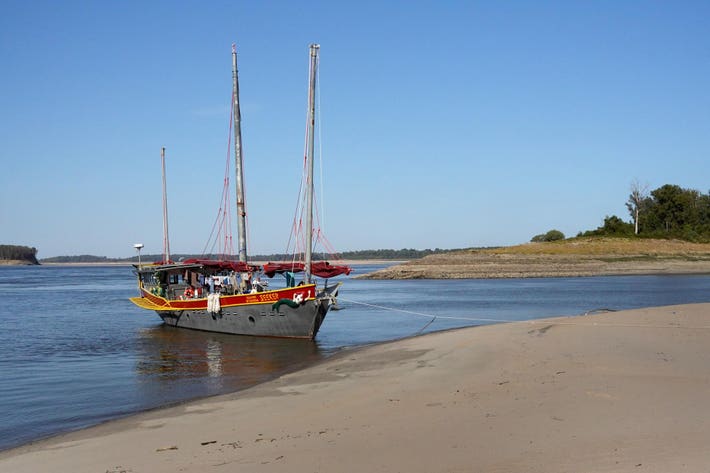 In Greenville, Mississippi, The SV Seeker, a 74-foot junk motorsailer, is tied off to shore on the Mississippi River after getting stuck in low water trying to get up a channel to a marina. The SV Seeker is a research vessel.

The economic damage and supply chain impact from the Mississippi River’s historically low water levels alone will be around $20 billion, according to AccuWeather experts. The mighty river is used to transport 92% of the country’s agricultural exports and 78% of grain fed to livestock. Shipments of soybeans, wheat, fuel and livestock also use the waterway to get to where they need to go. There’s no prospect that water levels will improve until next year.

From northwest Kansas, Mike Callicrate told Forbes that his ranch is the driest it’s ever been. One of the first irrigation wells in his county pumped over 2,000 gallons of water per minute from the Ogallala Aquifer when it was drilled over 50 years ago, he said. Now it’s lucky to pump 250 gallons per minute. 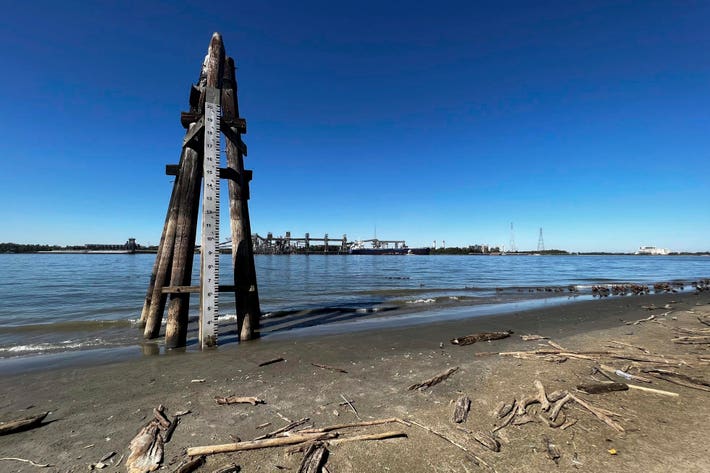 The South Platte and Arkansas rivers, two main recharge sources for the sprawling underground water source, are trickling out before they make it to the Kansas and Nebraska state borders, Callicrate said. Yet a new 150,000-head feedlot is planned for southwest Nebraska to expand meat production.

It’s the mighty Mississippi that supports those water systems. The USDA’s Rippey said that “short-term rainfall deficits, superimposed on long-term precipitation shortfalls” have resulted in record-low water levels this month along the Mississippi from New Madrid, Missouri, to Greenville, Mississippi. The low river levels have slowed barge transportation on the nation’s busiest inland waterway, which accounts for approximately 60% of all U.S. grain exports.

The bad news goes on and on. More than 70% of the northern Great Plains, an American breadbasket, is in drought. The U.S. corn harvest has been below projections. Seven of the top corn-producing states are in what’s deemed “exceptional drought” — meaning the already hard job of farming is even harder. As crops fail, prices rise. That’s how drought has been contributing to food price inflation, and why the extreme drought will likely drive price hikes into next year.

Iowa, for example, is one of the most productive agricultural states. It’s the top U.S. producer of corn, pork, eggs and the second-largest producer of soybeans. In the past month, as the fall harvest of corn and soybeans has neared its peak, more than 85% of the state has become parched by drought. That’s more than double the amount of drought-stricken land in September.

“The building and intensifying drought especially across the plains and the heartland, it’s something we’ve been really concerned about,” Porter said. “It’s a time when the country and global markets are already facing all kinds of inflationary pressures and grave financial hardship. With all the ongoing supply chain issues dating back to the pandemic and the domino effect, this is another supply chain problem. The timing could not be worse.”

Chloe Sorvino leads coverage of food and agriculture at Forbes. Her book Raw