Our national celebrated Ag Day yesterday. Farmers got their annual pat on the back in appreciation for their hard work and productivity. The data showing how many families each farm family produces food for were once again displayed. All this celebration went on in the midst of three years of below cost of production commodity prices headed full speed ahead that is squeezing family farming operations representing generations of work, sweat, and sacrifice out of business.

The dairy data below made an old wound of mine bleed. As someone that used to milk cows, when I look at the numbers below, I see non-competitive markets squeezing milk producers out of business. And, I see the milk processors using their deep pockets to effectively pursue dairy policies at the federal level that lines their pockets at the expense of their customers. Our dairies have failed, are failing, and will fail in the future as the direct result of a completely dysfunctional and failed one-sided national dairy policy that effectively sets the price of milk at below the cost of production.

I know first-hand why dairy producers close their dairies and sell their cows. The price of milk is below their cost of their production for long periods of time. The costs of doing business goes up while the price of milk stays the same or goes down. Dairy producers did not just get tired of the long hours and hard work. Like most farmers, many dairy producers are willing to “volunteer” their own labor and management to keep the business going when necessary to survive. It is another to work really hard and lose equity and cash. As I have been told by farmers who have gone through the liquidation process many times: “When your banker says you are done, you are done.”

When dairies close their doors, they no longer go to town to buy fencing materials, manure hauling equipment, clothing, veterinary supplies and services, milk barn supplies, cattle trailers, tractors, trucks, or pickups. Closed dairies no longer buy and use high quality hay, corn, soybean meal, or distillers grains, and they no longer need to employ folks to help them milk the cows, feed the cows, clean out the yards, raise or process the feed for the cows, and care for the cows in all kinds of weather. When I was milking cows with my family in the mid 1980’s, there were four dairies within four miles of home. Now, there are only four dairies left in Madison County.

Despite the massive failure documented by the numbers below, Congress is already telling us ahead of the Farm Bill development that they are going to “stay the course” on dairy policy. That approach will not make America great again. We know how the current dairy policy has worked, and will continue to work. Why would Congress knowingly lock in failure?

Where is the dairies decline trend going?

A dairy in Chino, Calif., that was demolished to make way for a housing tract

Last month’s announcement by USDA that there were only 41,806 licensed dairies left in the U.S. in 2016 is another stark reminder of how small dairying is becoming.

But looking at all 24 years for which licensed dairy farm numbers exist, and then projecting where the decline trend may be headed, is a real wakeup call about the industry future. Here are some figures to consider:

“Fewer dairies each year” is the easiest of all predictions to make about the dairy industry. But just like compounding interest rates for money, the effect of a compounding decline rates for farm numbers is eye-opening.

Even if the rate of decline were to slow significantly to just 3.25 percent per year, there would be only 21,592 dairies left in 20 years.

The dairy industry is clearly on track to have only half as many farms as it does today. The only question is which year during the 2030s it will happen. 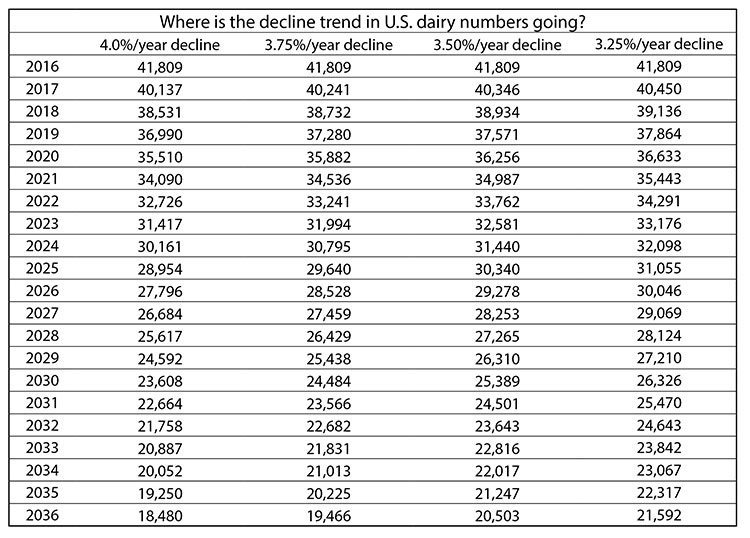