Posted in Daily
Restaurants Fear Clout of a New Food Giant
By
ANNIE GASPARRO and JESSE NEWMAN
Jan. 6, 2014 7:26 p.m. ET
Bobby Williams used to rely on US Foods Inc. to supply most of the ingredients for Lizard’s Thicket, the chain of Southern home-cooking restaurants his family owns in South Carolina.
But years ago, after learning that the government had accused US Foods of padding its invoices—allegations the company denied—he switched to rival Sysco Corp.SYY +1.01% “Luckily I had that option,” he said. 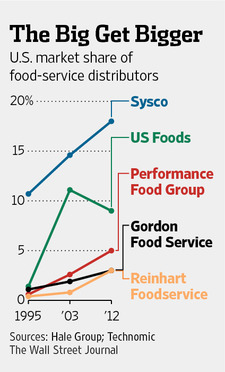 Customers like Mr. Williams will have less room for maneuver if Sysco completes its planned $3.5 billion purchase of US Foods. The deal, unveiled last month, would combine the country’s two biggest food distributors into a giant with $65 billion in annual revenue, five times as much as the next-biggest rival.

Sysco and US Foods aren’t household names, but they and their smaller competitors play a crucial role in getting food from manufacturers to consumers. The middlemen buy up meats, produce and other grocery items, warehouse them around the country, and deliver them to restaurants, schools and other outlets. They make money by purchasing in bulk and selling their wares at markups that range by product from about 10% to 50%, according to research firm Technomic.

The big national distributors hold significant sway over prices. Some customers say the competition between Houston-based Sysco and US Foods, of Rosemont, Ill., is one of the few weapons they have against the companies’ pricing power.

“There was definite panic in the restaurant industry among small businesses when the merger was announced. They know they’re going to get squeezed,” said Suzanne Aquila, who owns Bloomington Bagel Co., a three-restaurant chain in Bloomington, Ind. Ms. Aquila, a Sysco customer, said she has used bids from US Foods to negotiate lower prices from Sysco.

Danny Christofano , who worked at Sysco for 18 years and now is a consultant to local distributors, said the merger would give Sysco more leverage. “They will have more buying power and more pricing power,” he said.

Sysco says the planned merger would help it cut costs and improve service, and that its roughly 15,000 local competitors will keep its pricing in check.

Pricing tensions are common between food distributors and their customers, and have fueled several legal battles in recent years. That’s partly because the industry’s pricing practices make it hard, especially for smaller customers, to gauge markups. Technomic estimates that markups average around 25% between factory and restaurant.

The success of giant wholesale food stores, such as Restaurant Depot, and other rivals who offer online ordering is pressuring Sysco to be more forthcoming about its markups. Like other distributors, Sysco’s profit margins already are being squeezed: The company’s earnings in fiscal 2013 fell nearly 12% to $992.4 million as revenue grew by 4.8% to $44.41 billion.

Sysco’s profit margins are tightest with big customers such as restaurant chains, which have the heft to negotiate deals that make pricing more transparent. “Cost plus” contracts, for instance, tack a fixed markup onto what the distributor pays for merchandise. But even in those deals the industry can use methods that mask or muddy their actual costs, industry executives say.

They say a distributor might buy through other middlemen who pump up the price and then return some of the difference to the distributor as a rebate. Big distributors also can often arrange for year-end rebates from manufacturers if they reach certain purchasing goals. A distributor doesn’t typically pass those savings on to its customers.

Industry executives say this so-called sheltered income is essential for the industry’s survival. “That’s earned money that [the distributors] should be allowed to keep,” says Phil Carney, a former Sysco employee who now works for a regional distributor of ingredients for baked goods.

Mike Lockerby, an attorney with Foley & Lardner LLP who represents manufacturers in distribution matters, says the law generally permits distributors to profit from dealings with intermediaries as long as those intermediaries aren’t created to perpetuate fraud. He said rebate programs also are legal as long as they don’t violate a distributor’s contractual obligations.

In some cases, customers have alleged that distributors have inflated prices fraudulently. On Dec. 18, New York’s attorney general announced a $330,000 settlement with US Foods over allegations that the distributor violated its contracts with state and local institutions by failing to pass on manufacturers’ discounts to government customers like schools and homes for the elderly from 2009 until November.

In November, FreshPoint Inc., a Sysco subsidiary, agreed to pay the government $4.2 million to settle allegations that it overcharged the military for fresh produce between December 2007 and September 2009. The Justice Department and a former FreshPoint employee alleged that FreshPoint added “random price markups” to Defense Department invoices that increased the cost of goods by 30% to 40%.

In 2010, US Foods agreed to pay $30 million to settle the civil fraud allegations cited by Mr. Williams, the restaurateur, but it denied wrongdoing. The government had claimed that between 2000 and 2005 US Foods, then called U.S. Foodservice, used shell companies to fraudulently inflate the prices it charged the Pentagon and the Department of Veterans Affairs.

In 2006, lawyers filed a class-action lawsuit making similar allegations on behalf of restaurant and hospital companies that held cost-plus contracts with US Foods between about 1998 and 2005. The suit, filed in U.S. District Court in New Haven, Conn., claims US Foods established shell companies, like Seafood Marketing Specialists Inc., to mark up invoices in violation of customer contracts. It alleges US Foods then billed customers at the marked-up price, and the intermediaries passed back the profit to US Foods.

US Foods has denied any wrongdoing, saying in a court filing that its markups couldn’t be considered fraud because they were consistent with “common industry practice,” so its customers would have been aware of such arrangements.

The filing, dated June 29, 2012, claimed Sysco and other food-service distributors had similarly formed subsidiaries and “buying groups” that acted as intermediaries to issue invoices at the distributor’s discretion and later pass back money.

Dutch supermarket operator Ahold AHONY +0.11% NV, which owned US Foods until 2007, is liable for any further costs resulting from the class-action suit, which hasn’t gone to trial. Ahold declined to comment.

Mr. Williams of Lizard’s Thicket, who switched to Sysco about a decade ago, says his restaurant chain’s size—about $30 million in annual revenue–and track record of paying bills on time enables it to secure good terms from Sysco. In November, the distributor started allowing him to negotiate prices directly with manufacturers, to which Sysco adds service and delivery charges.”This is absolutely the best deal I’ve ever seen,” he said.

Still, Mr. Williams worries about the impact of the merger. Sysco and US Foods “work hard to better the other company, and they keep each other on their toes,” he said. “If they don’t have to compete with each other, I’m not sure what will happen.”

Write to Annie Gasparro at annie.gasparro@wsj.com